I have lived and worked in Hedon, and brought up my family here, since 1967. By profession I have been Fellow of the Royal Institution of Chartered Surveyors (FRICS) for about 50 years.

My first involvement with local politics was with the Hedon Town Council to which I was appointed about 20 years ago.  The experience gained there emphasised the problems that the residents of the Ward experience.

So when I was asked to stand for the East Riding Council in 2010 it really appealed to me, as being an East Riding Councillor would give me the contacts and links to improve the situation for more people. I was elected in 2011 with a very useful majority.

Since joining I have been involved with several committees, some of which I have chaired. This has given me a broad range of experience enabling me to help a large number of people needing assistance on all sorts of issues.

In recent years I was given responsibility of being Chair of Review Panels and found that role fascinating. The sort of subjects investigated in great depth have included: police performance in the region, the flood mitigation measures and wind farm grant panels. But by far, the chairing of the Yorkshire Waste Water Treatment Work investigation of the Hedon Stench issue has given me the greatest satisfaction.

I recall that YW were invited to send a spokesperson to one of our Review Panel meetings.  When the day  along, not just a spokesman, but 12 Director Level representatives turned up, including the CEO of the parent company, Kielder Water Ltd.  They certainly had their attention grabbed!  The upshot was that they agreed to spend whatever was necessary to get rid of the offending smell - for good.   So far, over the past 4 years, their expenditure has approached £50 million.  The Hedon Stench is a thing of the past.

In 2016 I had the honour of being the Chairman of the Council, which was a great experience and an eye-opener. There were literally hundreds of engagements.

In May 2019 I was re-elected and subsequently became a member of the Cabinet team which is very pleasing.

I look forward to the future years being involved at the forefront of East Riding matters and relish the challenge. 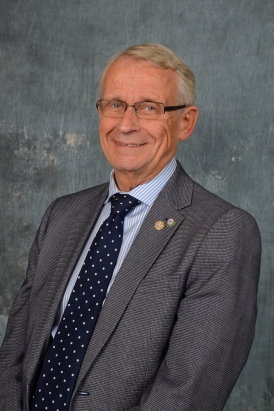